I was almost 16 when Star Trek First Contact came out.  It was the first Star Trek movie I ever saw in the theater and it changed how I viewed Star Trek.

My family was Star Wars fans in the sense that it was our yearly Christmas Break movie that we would watch each year and then the VHS was put away.  My parents had a great copy that they had recorded off of HBO from the early 80’s.  This was the classic version, Han shot first, no special features, just classic Star Wars.  Star Trek was not held in high esteem in my household. 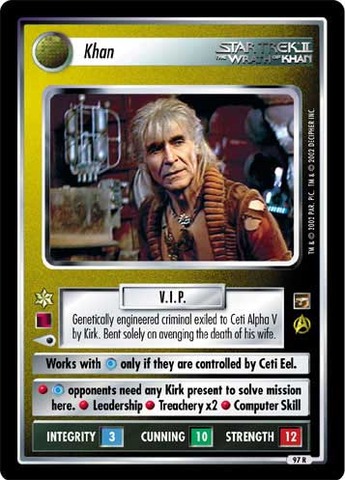 My parents never watched Star Trek, my Dad thought it was really boring and didn’t normally care for future/Sci-Fi type of items.  My Mom like Star Trek II: The Wrath of Kahn but I think it must have been more about Ricardo Montalban, Khan, more than it was anything else.

After seeing First Contact I was enthralled   I wanted more of the Borg.  This was the early internet days and finding information about the Borg was not something that came easy.

First Contact and the Borg are what got me into Star Trek and turned me into a fan.   Deep Space 9 quickly turned into my favorite Star Trek show and it’s currently something I’m rewatching on Netflix.

The Nashville area was a hotbed for card games.  I was playing Star Wars CCG, Magic, Marvel Overpower and Middle Earth around the time First Contact came out.   Jim Colson would come to run events for Star Wars from his home in Huntsville Alabama and showed us how to play Trek after events.  He introduced us to Chris Swearingen, one of the top Trek players at the time.  Chris and Jim  introduced us all to Star Trek and we enjoyed the slow pace that Premiere, Alternate Universe and Q Continuum provided but we wanted that next set that was coming out soon, First Contact.

First Contact hooked the Nashville area Star Wars player group and got us fully invested into the game.  With it’s glossy new cards, cool images of Borg characters and a new version of the Bridge Crew, First Contact was an immediate hit.  From Brian Rippetoe to the group of players that called themselves The Collective, Nashville players were making names for themselves with the Trek community.  I played Trek until I went to college in Utah where the lack of a player base and studies in college took me away from the game.  I’ll never forget the first time I put Reginald Barclay down and probed Visit Cochrane Memorial at the first big regional event held in Nashville after First Contact was released. 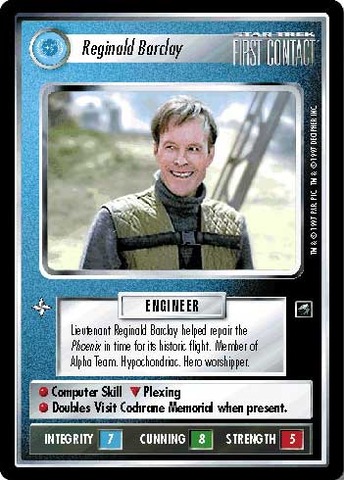 CategoryOneGames has been on the internet for over seven years.  This whole time I have wanted to get Star Trek 1E and 2E onto the site but have never had a back end infrastructure that made it possible.  That all changed when C1G made the switch to it’s current website system and it has allowed us the ability to add on additional games to what was already being sold.

I’m proud to announce that Star Trek 1E is currently on the site and is already seeing sales and customers trading us their cards for store credit.  I’ve scoured  multiple websites and eBay sellers to check each of our cards prices and have priced our selection as the lowest on the internet.

The best thing C1G offers Star Trek fans is the option to choose.  C1G has a three tiered system for grading and pricing.  Mint/NM look like the card was pulled fresh from the pack and is a must for any serious Star Trek CCG collector.  Slightly Played is for the cards that have a great front but have some scratching on the back and might have a nick or two on the front.  A lot of the cards in stock from Reflections and Trouble with Tribbles fall into this category.  It’s nothing to do with the front of the card, but bad quality control from the printer that Decipher had print the cards that left printer streaks and scratches on the back of cards.

If you are a player of Star Trek, Played condition is the area you want to concentrate on.  These cards are greatly discounted from our Mint pricing.  The cards differently show the wear from years of love and play but they are perfect for putting into that card sleeve and throwing in your deck.

A few things of note.  Premiere WB Alpha and Beta will be added to the site but there are other sets I would rather get to.  The inventory for DS9, AU, Q and Premiere BB are not as large as they will be.  I was sorting those to put on the site when I got the large collection of over 200,000 cards in.  Much of it is Star Trek 1E and 2E.  A full supply of 2E will be added to the site and I’m hoping to have it up by the end of June.  Sorting this many cards, grading for condition and pricing/listing is not a quick task.

My hope is that CategoryOneGames will be your destination for Star Trek CCG cards.  C1G is looking to provide you with the largest continually updated selection of Star Trek cards on the internet and offer you a place where you can trade and sell your cards. 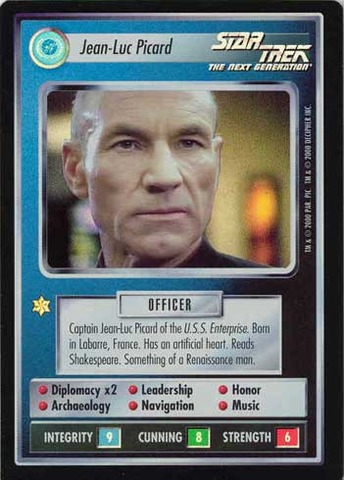