I love playing Decipher made card games.  The games make you feel like your in the movies, making choices for the characters as the story progresses.  The art and design are beautiful and the characters are those that you cherish.  I’ve been a big fan of Holotable to play Star Wars CCG but now there is a new game engine to play around with, Gemp Star Wars CCG.

Based off of the GEMP LOTR engine, the Star Wars version is starting from the beginning.  The only sets currently available are Premiere, A New Hope and the first OTSD cards.  The amazing thing about GEMP Star Wars is that you can do sealed events, which happen to be my favorite. 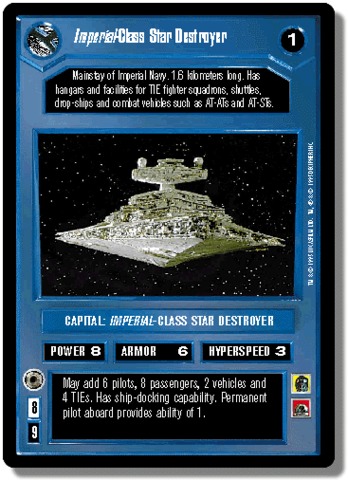 This takes you back to a simpler time.  If you played the game from when it started, the feel and cards will be intensely familiar.  As I’ve been building and playing games on it, I find myself realizing how much slower the game was back then.  If you don’t get force out almost immediately and your opponent sets up quickly, the game is basically over.  A quick spy to a 2/0 LS location and a Tie Scout to a system and your draining for four on turn two.

There is an innocence to the game.  A lot of the skill and memory of how cards work are removed and it breaks it down to a simple mad dash to get force generation and to find the cards that can actually be useful for you at that time. 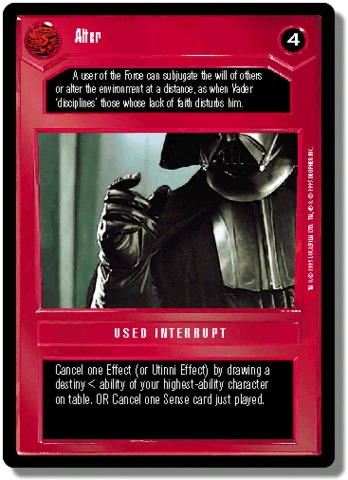 Sense and Alter are must haves but can be huge resource drains if you have a handful of them but can’t find a character or site to deploy.

If you love the game, you need to get onto GEMP and start building decks and playing.

The next step is going to be Hoth.  Hoth added a whole new dimension to the game upon it’s release, a new planet and mechanics to explore.  Walkers and Trample for Dark Side and EBO and Speeders for Light Side.

Now a lot of people are going to look at this and think, ‘I don’t remember what decks were good’.  Well neither did I when I started it back up.  I put a lot of cards into a deck and realized I had 80 cards and had to cut 20 of them.  I started looking through old Scrye magazines and I found the top four decks for each side from the first Worlds event.  I posted them here in order to make it easier for you to return to the game that you love.